VERSIÓN M: MECHANICAL
The mechanical version is designed for on/off operation depending on the
suction pressure (pump-down).

VRC system: Variable Refrigerant Capacity
The VRC system applied to a reciprocating hermetic compressor adjusts the flow of refrigerant to the evaporator unit’s demand by maintaining constant pressure in the suction line.
The VRC system is composed of a set of pressure and temperature valves capable of progressive variation of a compressor’s cooling capacity between 100 % and 10 % of this rated power, at the sames time the system reduces electrical input power and protects the compressor, maintaining its compression ratio within security margins, eliminating the risk of overheating. 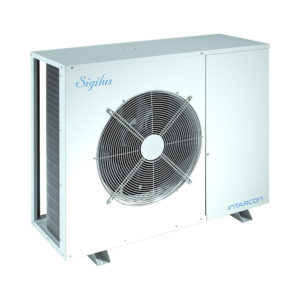